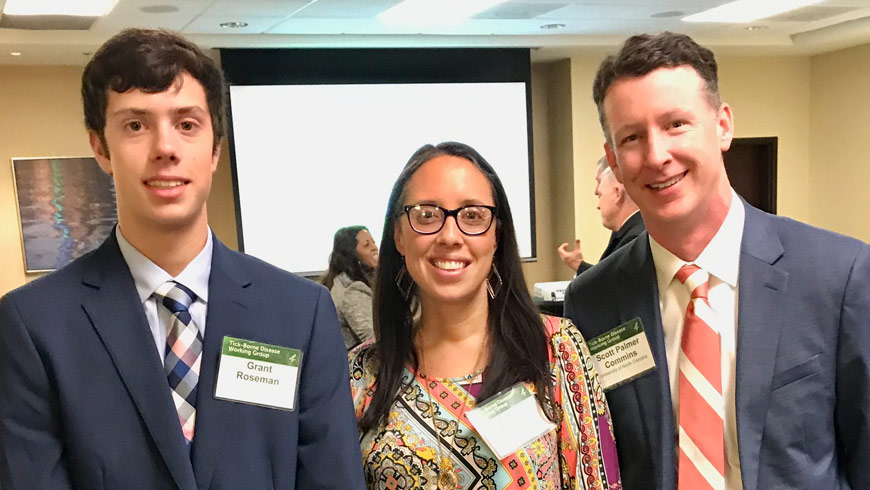 After hearing from the public each day, the Working Group reviewed multiple subcommittee reports on tick-borne conditions (including Ehrlichiosis, Rickettsiosis, and Babesiosis) in preparation for their 2020 Report to Congress. All reports were well received, including the Alpha-gal Syndrome Subcommittee Report, to which TBCU Cofounder Beth Carrison contributed as a member. Here are links to the individual reports:

Dr. Platt was in DC again for the Center for Lyme Action’s first-ever “fly-in” Feb 11-12. The Kay Hagan Tick Act was passed in December 2019, but now needs funding to enact. Sixty advocates from around the U.S. flew in to make the case to members of Congress.

Jennifer joined three other advocates from North and South Carolina and spent six hours visiting key staff for our members of Congress. The goal was to educate them about the importance of the Tick Act and other measures needed to support tick-borne disease research.

Also attended, was the Tick-borne Disease Working Group’s meeting in Philadelphia this week, March 3-4. The Working Group will spend two full days reviewing recommendations from seven subcommittees. Dr. Platt was a speaker on the morning of March 4. You can view the agenda here, or tune in anytime, here.

If you have any comments on the reports linked above or you have other feedback for the committee, please write them at tickbornedisease@hhs.gov.

Dr. Jennifer Platt has decades of experience in public health and environmental program development. She has led the creation of nationally recognized, award-winning education programs and has spoken extensively to audiences of all sizes.

While working on her doctorate in public health from the University of North Carolina in 2011, Dr. Platt contracted Ehrlichiosis. She was later confirmed to also have Lyme Disease and Babesia.

Dr. Platt’s personal experience with tick-borne illness led her to create TickWarriors in 2016, which provides eco-friendly tick protection for people, pets, and property. The pervasive need for education and awareness led Dr. Platt to co-found Tick-borne Conditions United in 2018 with Beth Carrison.

Tick Bites Proven To Be Risk Factor for Alpha-gal Syndrome

Farewell 2022! Happy New Year! Despite all the challenges of…

Our work and advocacy has made national news! Dr. Jennifer…

Congratulations to TBCUnited CoFounder, Dr. Jennifer Platt on her appointment…

TBCUnited.org is a nonprofit 501 (c)(3) corporation and a community that supports health care providers, affected patients and their families, and employers with the latest research, science-based knowledge, and innovations to diagnose and treat tick-borne diseases.

TBC United is also a patient advocacy organization. We contribute to, and help promote, the creation of new public policies and legislation that can improve the lives of people with tick-borne illnesses.

Get engaged with us.

If you find our content helpful, you can support our work to educate, research, and advocate for the lesser-known conditions. Your donations are greatly appreciated.
Donate
Copyright © 2023   |   Tick-Borne Conditions United ™   |   Tax ID: 83-4201096
Back To Top